To Prussia With Love

Some mornings go smoothly, sadly today was not one of those days! Having spent most of the week waking early and not getting back to sleep (in fact one morning I got up at 4 am as wide awake!) this morning I woke up early but kept falling back to sleep, I knew I couldn’t do that as had a two hour journey to Cornwall ahead of me. Eventually and later than I should, I parted company with the Duvet. I then discovered the hydration pack I had put in the freezer had leaked everywhere and knew I could not take it with me as would make me a sticky mess on the run. I convinced myself that it was not needed as only an 11 mile run, in theory this is doable without too much hydration. The trouble is I am a bit like a baby, or female relic (hers with alcohol) I like to sup on demand!! This was a eco friendly, non plastic event and knew we would be given a collapsible cup we could use at water stations, so all was not lost I hoped. On the journey down I realised I had forgotten my rain coat and my banana, lack of sleep rather than being ditsy is obviously to blame for this! I hoped the run would go smoother.

The weather was foul on the way down and even worse on arrival in Marazion, I braved the public loos and then the walk to registration and then retreated to my car, the wind was awful and of course my coat was at home. The umbrella was dangerous and I didn’t fancy doing a Mary Poppins, so a sit in the car it was until just before the off.

I love a pre event brief. I love even more a pre event brief with humour and this one was defiantly of that kind. The best line was when we were advised that the there would by food at some of the aid stations ‘but only a little, after all this is a trail run, not your Nan’s 80th’! It was a lengthy brief, but worth it.

Finally we were off, Marazion to Prussia Cove along the coastal path (except for the eroded bit), and back. In fact this is my first ever out and back event and I quite liked it. Every up I was thinking this will be a down next time and every down I was think **** I’ve got to go up this in a bit. I wasn’t a fan of the part on the sand dunes that we did twice, near the start and near the end, soft sand is a mare to run on especially when you are wearing trail trainers that resemble open toed sandals!! By South West standard the ups and downs were quite genteel, some of the styles and steps and rocky paths made things interesting, stone tracks should be approached with caution when you err on side of clumsy as I do, damp stone riddled paths with trail trainers meant I ran with my heart in my mouth for most of the 11 miles, which actually of thinking about it might be the reason I was breathing like a Buffalo!

Another great thing about an out and back is it breaks the run up and the view is different for the return leg, oh my and with St Michaels Mount to look at along with the lovely Cornish Coves, it was delightful, except for one thing – THE WIND – it was horrendous on the return leg.

The miles actually flew by, not something that happens often, it was not too strenuous a run, had a variety of terrain and I got some awesome bling and an eco cup for use on my next event, so all in all a great time was had. Now I am often to enter my next one!!! 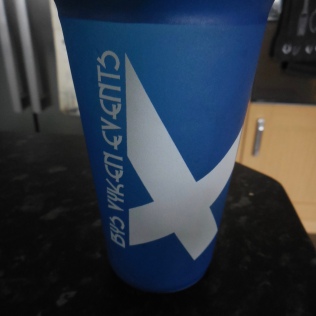 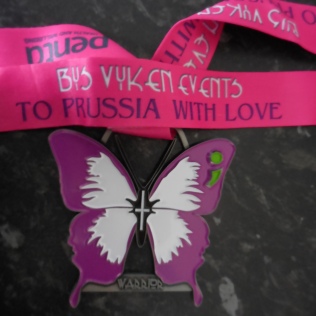 I have been running since 2004 when I decided to do the Race for Life, as a close friend was terminally ill with cancer. Following that I did a couple of 10km at Leeds castle and Sandringham. Then in 2005 ran my first London marathon, then another in 2007 in blistering temperatures. I have entered the London marathon every year since but have been rejected, am now find maintaining my fitness & motivation hard, so when the email came through about Janathon I thought why not! Am hoping this helps with fitness, motivation and weight loss!! Wish me luck!
View all posts by shazruns →
This entry was posted in Running, trail running and tagged Bys Vyken CornishTrails, running, South West Coast path, To Prussia With Love, trail running. Bookmark the permalink.

1 Response to To Prussia With Love