The Crossing (of Dartmoor)

Firstly let me tell the non local readers about Dartmoor……………….

Dartmoor National Park is a vast moorland in the county of Devon, in southwest England. Dartmoor ponies roam its craggy landscape, defined by forests, rivers, wetlands and tors (rock formations). Trails wind through valleys with Neolithic tombs, Bronze Age stone circles and abandoned medieval farmhouses. The area is dotted with villages, including Princetown, home to Dartmoor Prison used during the Napoleonic Wars.
This is a map of Dartmoor

The red line is The Crossing route except it finished at South Brent-my Garmin keeled over two miles from the finish basically it was Georges was of telling me I had been out there too long, in fact he was just siding up with my legs! Thank God the brain is stronger!
Living in this small over populated Island it is easy to forget that there are areas of England where no-one lives except the cows, sheep and horses. That is what makes this area so special, miles and miles of panoramic views. 34 miles of which I plodded over yesterday.
As this was a linear route transport in the form of Double Decker buses was laid on to get us from Finish to Start. Double Decker buses are great in London for transporting commuters but load them with runners and all their mandatory kit send them up some hills and things get interesting. At points in the journey I really thought we should all lean forward just to help the bus get to the top of an elevation, but we made it at Belstone with plenty of time for three nervous wees and to register!
If you read the last post you will know that there was a mandatory kit list and because I am a good girl and there was no way I wanted to run 34 miles to get DQ’ed at the end I had it all, however it was obvious that many were not as well behaved. Sensible but naughty! My pack was heavy, Tommy the Turquoise Hydration Pack rubbed me up the wrong way, I am sure with some adjusting we will have many good adventures but right now I am sore……

angel wings my badge of honour!
Underfoot the course was the hardest I have ever done. Rocky, boulder strewn paths alternating with mudding bogs. Hills I can cope with but the unevenness of the paths soon took their toil on my body. By mile 11 my ankles hurt, I popped pills, by mile 20 my knees hurt, running was tough going, I think maybe 5 miles were on a surface you could run effectively on.
The course was really well marked, across the moor where there wasn’t a path as such you followed little orange flags, whoever laid these out had a sense of humour or liked mud, many placed right in the bogs, deviations were needed.

The flags were quite literally a life saver, I used them to keep me going, run to the next flag Shaz, and the next one, walk to the orange flag Shaz then run and repeat for 10 miles! Despite being marked out so well, I still managed to go wrong twice-must work on that concentration.
In the beginning I saw people, I followed people

When I looked back I saw other runners

but this was not the case for very long, soon I only saw humans at checkpoints. 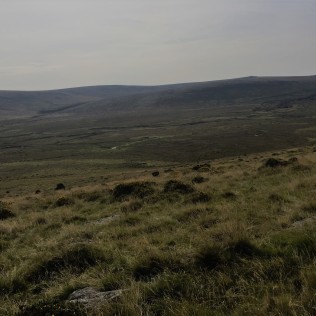 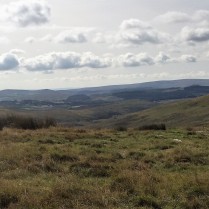 Thanks to Sal for this pic, she is on Instagram @trail_running_sal

See what I mean. Not a sole insight. This meant a call to Annie’s Mr Mental Toughness of as I like to call it ‘stubbornness’, a quality (I use the term loosely) that I have plenty of which probably makes me a night mare to live with, but is so very handy when endurance running!

I decided to keep myself company, conversation had dried up so singing it was then. Kate Bush’s Wuthering Heights seemed apt-although the wrong moor, but seeing as I couldn’t remember the lyrics or for that matter hit those high notes whilst running I opted for the more simple, 10 Green Bottles, followed by There was 10 in the Bed and Kum ba yah, all those years Girl Guiding came in to their own!

You will notice from the pics that there is a lack of a bushes! When running distance it is critical at times to have a some cover occasionally. Fortunately a large piece of heather appeared at just the right time, my legs objected to the squat and despite a dodgy aim and consequently a wet foot, mission was accomplished before the runner behind me appeared saving his blushes and more importantly mine. God this long running stuff is just so damn glamorous!

The highlights from this amazing run were

The whole idea behind entering this event as you know was to practice fuelling and recovery in preparation for the two-day event in October. Fuelling went well, with only one caffeine gel consumed at 25 miles, I didn’t sleep too bad last night and am not too stiff today but whether I could run that distance again today remains to be seen but until then I will try to find my ipod to save myself from my singing!

I have been running since 2004 when I decided to do the Race for Life, as a close friend was terminally ill with cancer. Following that I did a couple of 10km at Leeds castle and Sandringham. Then in 2005 ran my first London marathon, then another in 2007 in blistering temperatures. I have entered the London marathon every year since but have been rejected, am now find maintaining my fitness & motivation hard, so when the email came through about Janathon I thought why not! Am hoping this helps with fitness, motivation and weight loss!! Wish me luck!
View all posts by shazruns →
This entry was posted in cross country, Devon, Photography, Running, trail running, Training for an Ultra, ultra running and tagged Belstone, Dartmoor, Pure Trail, pure trail running, running, South Brent, The Crossing, trail running, Ultra marathon, ultra running. Bookmark the permalink.

7 Responses to The Crossing (of Dartmoor)