Perfect conditions and a photo for Phil

Yes this morning had all the makings for a great run.

there is always a but isn’t there?

Ok so the first half was ok, but the trouble with an out and back route is that you have to get back, not ideal to be 5 miles away from the car and be struggling. Yesterday I was not feeling 100% so maybe fighting a bug this might be the reason it was tough. Or maybe its just because todays 13 miles was my longest run since 30 June. Quite disheartened by my lack of fitness. So hard to get fit but my you can loose it so quick, unlike weight which is so easy to gain and damn near impossible to loose, unless you step away from the cake and that is tricky, isn’t it?

Anyways onwards and upwards, that’s the bad run out the way for a while I hope.

Now on to something to lighten the mood. Phil over at notmuchofarunner (he has been quiet for a while, where are you Phil?) has been known to write blogs about an inappropriate apostrophe, featuring photographic evidence. He will also point out my typos and spelling mistakes (he is not even an English teacher) which shows he is reading and paying attention.

Well the in the village there has been a sign, that I have been desperate to take a photo of, with a misspelt word. I am so glad I waited as this morning the error had multiplied and now I can give you two errors……………………………… 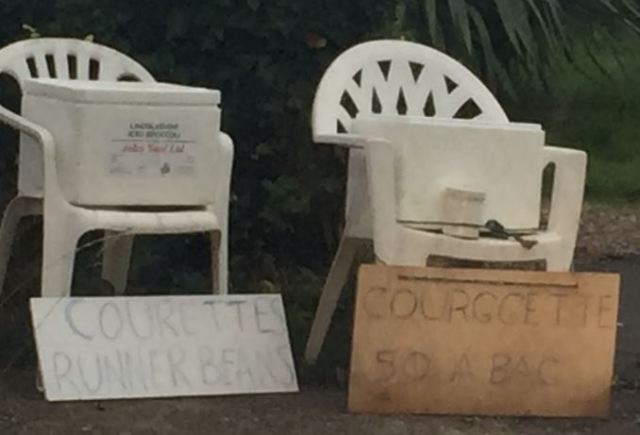 Tempted to create another sign to hang above with a big arrow, moving a G leftwards!

I have been running since 2004 when I decided to do the Race for Life, as a close friend was terminally ill with cancer. Following that I did a couple of 10km at Leeds castle and Sandringham. Then in 2005 ran my first London marathon, then another in 2007 in blistering temperatures. I have entered the London marathon every year since but have been rejected, am now find maintaining my fitness & motivation hard, so when the email came through about Janathon I thought why not! Am hoping this helps with fitness, motivation and weight loss!! Wish me luck!
View all posts by shazruns →
This entry was posted in Bloggers, Devon, injured, Running and tagged Canal, LSR, running. Bookmark the permalink.

19 Responses to Perfect conditions and a photo for Phil