The race namers in Devon love a bit of alliteration!

Yesterday I drove to south Devon to do this 8 mile multi-terrain run. The web site advertised it as ‘8 miles of mud, sweat, tears and laughter through scenic countryside’, they were spot on although I did not shed any tears but only because running and crying is beyond my repartee!

On arrival I collected my number, so typically Devon that these beauties were supervising the number collection!

After that it was the obligatory stop in to the ladies, where I walked in to a conversation that went along the lines of “I don’t know why I do this race each year its a crap run and I hate it!” this did not feel me with enthusiasm and it was as much as I could do not to leap in my car and head home. We laughed about her negativity and I was warned that it was a toughie.

They did not exaggerate, it was by far the toughest event I have done to date. The ups were STEEP, the downs mostly unrunnable due to footpath steps, the mud came either deep and sloshy, or thick and trainer eating. Now I love my off road trainers pictured here in their new shiny condition (I kept them on the window sill for some time as they were so beautiful!) the tread on them is amazing, without them I would have been doomed. 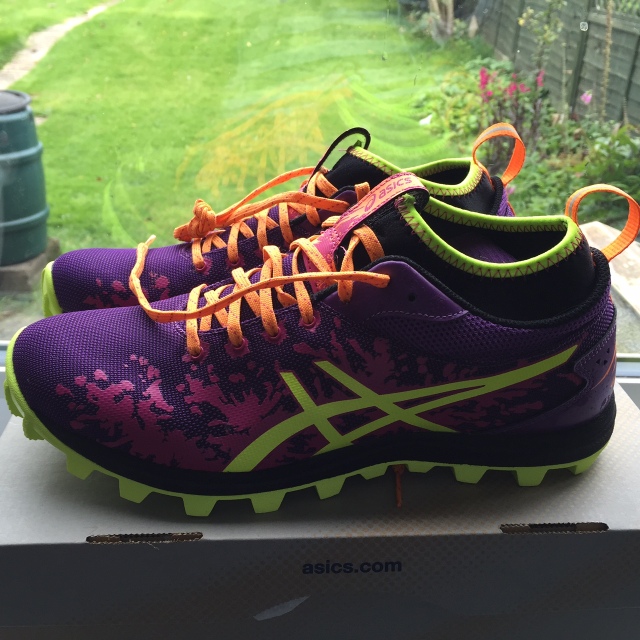 However on the little road sections, they were useless and on some stone steps, darn right dangerous. You know the scene from Home Alone the one where the baddie slips on the icy stairs and goes flying (love this scene), well that was very nearly me, believe me it took the wind out of my sails for a while, whilst I proceeded with caution.

Great grizzly training and marathon training, very much a case of ‘what does not kill you makes you stronger’!

My beautiful trainers are no longer beautiful thanks to the Devon orange mud.

This morning I took pity on my legs and treated them to a long run but this time on the road only. The 10 miles started at 6:30 am in the pitch black, with my head torch firmly in place. It was a peaceful run with only the owls keeping me company till the sun came up. Hard to believe that it is almost the middle of December, I could have run in my vest top it was so mild. The legs did not complain too much, so my thanks to them.

Saw this photo on the web and this really describes my weekend!

Although skinny would be nice also!

I have been running since 2004 when I decided to do the Race for Life, as a close friend was terminally ill with cancer. Following that I did a couple of 10km at Leeds castle and Sandringham. Then in 2005 ran my first London marathon, then another in 2007 in blistering temperatures. I have entered the London marathon every year since but have been rejected, am now find maintaining my fitness & motivation hard, so when the email came through about Janathon I thought why not! Am hoping this helps with fitness, motivation and weight loss!! Wish me luck!
View all posts by shazruns →
This entry was posted in cross country, Devon, London Marathon, Marathon Training, Running, Virgin London Marathon 2016 and tagged badass, Cockington Christmas Caper, hills, Mud, off road, running. Bookmark the permalink.