The day dawned. The leg felt stiff but the Achilles fine, a quick massage on the start line fixed that and I was raring to go. (well almost)

The running club was very well represented and it was great to see everyone. Not all doing the 20 miles, some wiser members had opted for the cub which is 9 miles.

The weather was fine, warmish and the forecast was good as long as I did not hang around.

We were off and right away it was on to the beach, for a leg strength sapping start. I knew I would find this tough and knew the Achilles would not be happy, but took it steady and got to the end.

The little figure to the right with the yellow top and hat on is me! The hills behind us is where we will be going. (picture stolen from local paper)

Then it was up out of Seaton on the road before dropping down and then up again to Beer, then down the high street before climbing up again to the holiday park. The up down thing was very much the theme of the run! 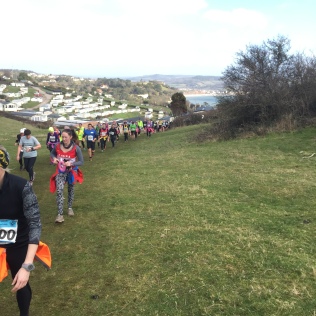 Here I saw a few of my running buddies, dumping my jumper with my friend who was meant to be running with me, but had to pull out due to a chest infection putting pay to her training. Great to see some familiar faces and get a cheer out. The picture on the left shows the steepness of the hill, with the sea of runners, to the right the other side of the sea is the start line! The photo on the left shows I’ve still got a bit to go. At the top of this mountain is where this photo was taken

probably the last time I smiled!

Next it was the drop down to Branscombe, down a very muddy track before doing our second stretch of the beach this time through water, freezing cold water.

Not me in the photo-obviously but gives you an idea what we ran through and on!

This was the 5 mile mark, here we could opt to do the cub, but I was feeling fine so carried on, it was really too early to go back.

On I plodded, chatting to other runners on the way.

Disaster struck at mile 10 in the woods. The mud was pretty bad and very gloopy. No point trying to avoid so I just ploughed through the middle, whilst doing this I stood on a rock and managed to kick it up, this banged in to my right calf muscle. Oh my that hurt. It brought me to an abrupt halt. I convinced myself to keep running, thinking it would ease off. It didn’t! I had given myself a dead leg.

A lovely fellow runner dug some painkillers out of his bag for me when he heard me ask a marshall if they had any, I had to take them with no fluid. They did not help. I hobbled, limped, walked on. Then we came to the infamous bog. To add insult to injury I slipped in, promptly sitting in the first entryway. I tried to follow club advice and stuck to the rope, pulling myself along, struggling to keep myself upright in knee deep goo. Then came a hill so steep and slippy the only way I could get up it was to use the rope down the middle to pull myself up (aah that’s why my shoulders ache).

At mile 14 there was cake. Not just any cake. Battenburg cake. Probably one of my favourite things to eat. This lifted my spirits along with someone telling me I could run 10k and that was all I had to go.

This sign was obviously put up just for me

and I was not going to quit and be a DNF I was going to get to the end.

Eventually we were back at Branscombe and on the beach again at this point the calf let me know in no uncertain tones that running was not an option so it was a long slow walk to the Memory Tree.

Here I stopped took out my ribbon and tied it on a branch, knowing that my Grandparents would be stunned by what I was doing. Almost as stunned as I was!

Up we went then up the cliff on the stairway to heaven.

Once we got to the top, oh my the wind was fierce, I struggled to stay upright and had to take my hat off or risk losing it for ever.

Home stretch now Shaz. But the weather changed at this point, gone was the sun and dry. Down came the rain, then hail.

As I came towards the finish line, few people remained, who could blame them in that weather. The only ones left, were members of the running club who had stayed behind just to see me in. They ran to the finish line with me before detouring off to meet me the other side, collecting my t-shirt for me and helped me get me in to some dry clothes, took four of us to get me in to two dry tops! 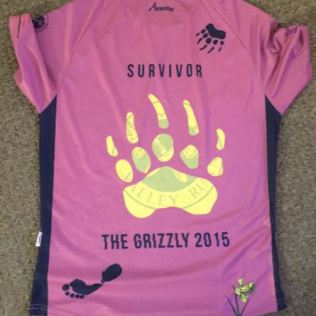 I love it. I love that it has the word survivor on it. Yes I survived and got to the finish.  Sheer stubbornness got me round. I am sure it is a great run, but unfortunately for half of it I was in too much discomfort to enjoy it.

The runners were lovely, the marshalls were amazing, organisation great, but it was the toughest thing I have ever done, tougher than childbirth AND both the Madams had big heads! No amount of training can prepare you for that mud and those hills but maybe just maybe if I start now, next year will be better.

(of course when I say now I mean when I can run, at the moment walking is tough!)

I have been running since 2004 when I decided to do the Race for Life, as a close friend was terminally ill with cancer. Following that I did a couple of 10km at Leeds castle and Sandringham. Then in 2005 ran my first London marathon, then another in 2007 in blistering temperatures. I have entered the London marathon every year since but have been rejected, am now find maintaining my fitness & motivation hard, so when the email came through about Janathon I thought why not! Am hoping this helps with fitness, motivation and weight loss!! Wish me luck!
View all posts by shazruns →
This entry was posted in Devon, Photography, Running and tagged Battenburg, CAKE!, cross-country, hills, injury, marshalls, Mud, running, survivor, T shirt, The Grizzly, The running club. Bookmark the permalink.

17 Responses to The Grizzly