After my hill run session this morning (three in three weeks!) Oscar chose where we would go today

he wanted us to go look at the animals on Dartmoor 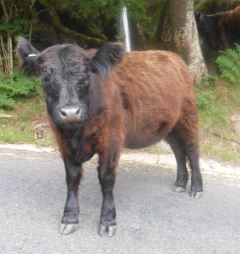 it seems the grass nearest to the road is the sweetest, horse, sheep and cows are not worried by the cars they are quite used to them, but get out of your car to see them closer and they beat a hasty retreat.

We had lunch by these stepping-stones, at Dartmeet, I was very tempted to play on them but left that to Madam as don’t trust my footing.

Hubby and Madam did some climbing

but i stayed low to take photos…

We stopped at Haytor, the highest Tor on Dartmoor 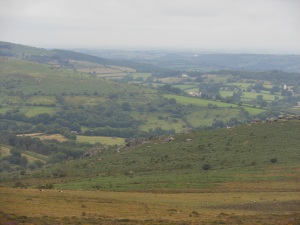 He could even see the sea from the top

We had a great day out and Dartmoor is definitely a place we will be returning to-frequently.

I have been running since 2004 when I decided to do the Race for Life, as a close friend was terminally ill with cancer. Following that I did a couple of 10km at Leeds castle and Sandringham. Then in 2005 ran my first London marathon, then another in 2007 in blistering temperatures. I have entered the London marathon every year since but have been rejected, am now find maintaining my fitness & motivation hard, so when the email came through about Janathon I thought why not! Am hoping this helps with fitness, motivation and weight loss!! Wish me luck!
View all posts by shazruns →
This entry was posted in Devon, Running and tagged animals, atepping stone, beautiful scenery, cow, Dartmeet, Dartmoor, Haytor, hill training, horse, River Dart, running. Bookmark the permalink.