Last week I was in Folkestone with work, I kept thinking I was going to Felixstowe (the beginning with F and ending with e thing just confuses me) even on the way down when reading the road signs I was looking for the latter. I did manage to arrive safely though and was amazed at how close to the sea the hotel was.

After work was done I ran along the sea front back along the Military Canal to the Dymchurch railway and back. I like running somewhere new but always find it hard to run for as long as I want as I am terrified I will not be able to find my way back to the Hotel!

Last weekend I managed a 10 mile run on Sunday and did it faster than the time before so was pleased with that, still slow mind!

This week I am up North yesterday in Manchester and now in Sheffield having navigated the Snake Pass in the fog. I did a little run yesterday, aprrox 3 miles but Mr Sat Nav was not happy that I had moved miles away and failed to find a signal for 20 minutes by which time I had had enough of the hills!

Last night I went to the Trafford Centre for a quick look around. Its more of an ‘experience’ than a shopping centre with the eating area being made to look like a cruise ship 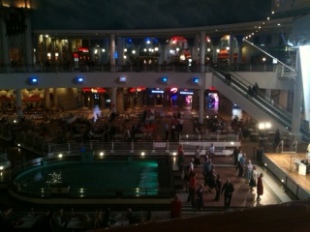 My heart felt thanks go out to a Manchester Samaritan who helped me yesterday in my hour of need, Being married to a mechanic means I get free car fixes but also means my car is not maintained or checked on as it should be (bus-mans holiday and all that), granted I could do the checks and I used to when single but now I tend to leave it to himself after all he leaves me all the ironing, washing, cooking, cleaning, baking, dusting, etc to do. Anyway I digress. In the morning my oil light came on so I went off and bought the oil, confident that I could dip and top up. Dipping was fine but the oil cap would not budge. A call to the hubby and the advice was ask a passing man to help!! The first one to pass was on sticks so not a great contender, the second I spotted was in his car with dog and girlfriend so I decided he was safe to approach. He lept out of his car keen to help however he could not budge the cap either! Another call to hubby and this time he suggested I take a picture of the dipstick and send it to him! In the process of doing this a man came over and asked if I needed help, after all I guess its not usual to take photos of an engine! He dipped and surmised that indeed I needed oil, then I explained the dilemma with the cap, He tried to remove it and eventually it came free and he topped the oil up for me, I wanted to throw my arms around his neck and give him a big kiss in gratitude but considered this might be a bit forward of me so instead opted for the gushing thanks. My night in shining armour comes along in Manchester-go figure!! From now on I love all Mancurains! (except Rooney I draw the line at Rooney)

Hope you are still awake sorry its been such a long one.

I have been running since 2004 when I decided to do the Race for Life, as a close friend was terminally ill with cancer. Following that I did a couple of 10km at Leeds castle and Sandringham. Then in 2005 ran my first London marathon, then another in 2007 in blistering temperatures. I have entered the London marathon every year since but have been rejected, am now find maintaining my fitness & motivation hard, so when the email came through about Janathon I thought why not! Am hoping this helps with fitness, motivation and weight loss!! Wish me luck!
View all posts by shazruns →
This entry was posted in Uncategorized and tagged Folkestone, good samaritan, Manchester, military canal, running, Sheffield, trafford centre. Bookmark the permalink.

2 Responses to Catch up