Helloooooooooo long time no blog I know. Thanks to all who have stopped by to see if all ok, was nice to feel missed! The reason for no blogging has been no running. Since Juneathon I have ran twice and one of those was with madam doing the Race for Life. (Yes we did run it all mainly because I wont let her walk-cruel I know) I have been busy at the gym though trying to gain speed on the treadmill not sure this will transfer to the non moving ground only time will tell.

Madam, hubby and I have just started a 2 week holiday in Cornwall. I have gained special permission to run whilst we are away-not something usually granted. Must admit he might be regretting allowing this as when I climbed in to my running gear this morning he was heard to  mutter ‘I thought you might have stayed in bed a bit longer on the first day of our holiday’ (It was 7.45 so not early by normal standards so think he should count himself lucky.)

We are staying in Hayle which is just across from St Ives and it is BEAUTIFUL. My run took me this morning along the coastal path and if felt great to be out running and the scenery helped. Only 3 very slow miles which helped me decide NEVER to do the Marathon de Sables (as if) as running up hills is not my thing anyway but running up sandy hills is believe me IMPOSSIBLE. As I told myself the holiday runs are not about speed but about enjoying the ability to be able to run with such fantastic views.

I was back showered, dressed breakfasted and on beach by 9.30! Madam, spent time in the sea with Dad and surf board. I read my running magazine. In it was an advert to run Hadrians Wall next June-65 miles over 2 days if desired-mmmm now there is a thought. Any one fancy it?

After shower for madam (cant stand the feeling of sand in her toes) and lunch for all we headed in to Hayle for a walk around. We happened to pass the ice cream parlour, not sure how that occurred really but I had the map! I opted for Ferrror Rocher ice cream and is was simply the best and could not help thinking that this was TravellingHopefullys Janathon and Juneathon treats amalgamated!

This is the view from the flat! 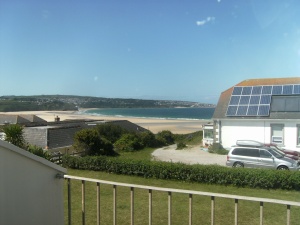 So thats it for today, tune in tomorrow for another exciting episode of our Cornwall adventures!

Todays run is dedicated to Paula sorry to hear of her sudden death last week.

I have been running since 2004 when I decided to do the Race for Life, as a close friend was terminally ill with cancer. Following that I did a couple of 10km at Leeds castle and Sandringham. Then in 2005 ran my first London marathon, then another in 2007 in blistering temperatures. I have entered the London marathon every year since but have been rejected, am now find maintaining my fitness & motivation hard, so when the email came through about Janathon I thought why not! Am hoping this helps with fitness, motivation and weight loss!! Wish me luck!
View all posts by shazruns →
This entry was posted in Uncategorized and tagged Cornwall, Janathon, Juneathon, running. Bookmark the permalink.

9 Responses to Greetings from Cornwall!